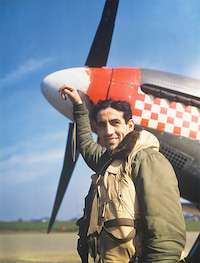 Words At War, the series that brings you radio versions of the leading war book another adaptation of an important war book, “One-Man Air Force”. Sponsored by: Johnson’s Wax. The story of Don Gentille, one of America’s top aces of the war. Don Gentille’s mother speaks after the drama from Cincinnati.