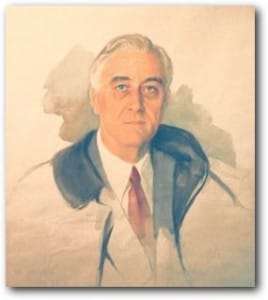 Franklin Delano Roosevelt (01/30/1882 — 04/12/1945), also known by his initials FDR, was the 32nd President of the United States and the only president elected into more than two terms in office. FDR was a central figure in world events during the mid-20th century, leading the U.S. during a time of worldwide economic crisis and war, and worked closely with Winston Churchill and Joseph Stalin in leading the Allies against Germany and Japan in World War II.