“Yesterday, December 7, 1941 – a date which will live in infamy – The United States of America was suddenly and deliberately attacked by naval and air forces of the Empire of Japan…As Commander-in-Chief of the Army and Navy, I have directed that all measures be taken for our defense…With confidence in our armed forces – with the unbounded determination of our people – we will gain the inevitable triumph – so help us God.” – President F.D. Roosevelt (December, 8, 1941) 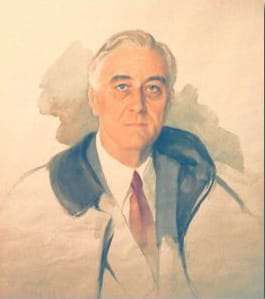 Franklin Delano Roosevelt (01/30/1882 — 04/12/1945), also known by his initials FDR, was the 32nd President of the United States and the only president elected into more than two terms in office. FDR was a central figure in world events during the mid-20th century, leading the U.S. during a time of worldwide economic crisis and war, and worked closely with Winston Churchill and Joseph Stalin in leading the Allies against Germany and Japan in World War II.

In July of 1941, after Japan occupied the rest of Indo-China, FDR cut off all sales of oil to Japan, causing them to lose more than 95% of their oil supply. While he continued negotiation with the Japanese government, he shifted the long-range B-17 force to the Philippines. After the attack on Pearl Harbor, President Roosevelt signed a declaration of war against Japan on December 8, 1941 and made his famous speech, quoted above.

On the afternoon of April 12, 1945, while sitting for a portrait painting by Elizabeth Shoumatoff (see image), President Roosevelt said, “I have a terrific pain in the back of my head.” He slumped forward in his chair unconscious and had to be carried to his room. His doctor, Dr. Howard Bruenn, diagnosed FDR with a massive stroke, and that day, at 3:35 p.m. Roosevelt passed away. The moment Roosevelt fought so hard for, V-E Day, came on May 8th, less than a month after his death.

Tale a look at these other WWII Posts: