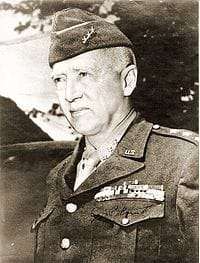 George Smith Patton, Jr. (11/11/1885 — 12/21/1945) was a US Army officer best known for leading troops as a general during World War II. He commanded in North Africa, Sicily, and the European Theater of Operations. Patton was well known for his controversial outspokenness and jeopardized his career by slapping a soldier recuperating from battle fatigue in a hospital. George S. Patton, Jr died as the result of a car accident in Germany and is buried in the Luxembourg American Cemetery and Memorial in Hamm, Luxembourg along with other members of the Third Army. It was Patton’s request to be buried with his men.