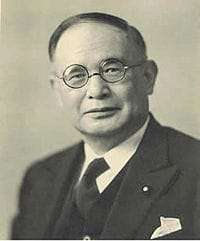 Mamoru Shigemitsu  (07/29/1887 — 01/26/1957) was appointed ambassador to the Nanjing Nationalist Government two days after the attack on Pearl Harbor and by the end of WWII was the Japanese Minister of Foreign Affairs. He came into that position on April 20, 1943, when Japan’s Premier, Hideki Tojo, fired foreign minister Masayuki Tani, which was viewed as a sign that Japan was preparing for a collapse of the Axis Powers. Mamoru Shigemitsu and General Yoshijiro Umezu signed the instrument of surrender on September 2, 1945.