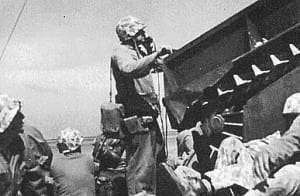 Captain Henry Pierson “Jim” Crowe (1899-1991) could be considered one of the most famous Marines of World War II. He served in World War I and was commissioned as a Gunnery Warrant Officer in WWII and then promoted to captain after Pearl Harbor. In November of 1942, Captain Crowe landed with the 8th Marines in Guadalcanal where he later received the Silver Star for his actions. He was awarded the Navy Cross for his bravery on Tarawa and then a Purple Heart for his leadership on Saipan in June of 1944 which ended his combat service. He continued to serve for the USMC until he retired in the late 1950s.