“Soldiers, Sailors, and Airmen of the Allied Expeditionary Force: You are about to embark upon the Great Crusade, toward which we have striven these many months. The eyes of the world are upon you….I have full confidence in your courage, devotion to duty and skill in battle.” 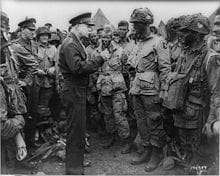