“You cannot invade the mainland United States. There would be a rifle behind each blade of grass.” – Admiral Isoroku Yamamoto 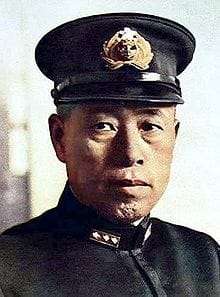 Admiral Isoroku Yamamoto (04/04/1884 — 04/18/1943) was a Naval Marshal General and the commander-in-chief of the Combined Fleet during WWII. A graduate of the Imperial Japanese Naval Academy and a student of Harvard University Yamamoto held several important posts in the Imperial Japanese Navy. Admiral Yamamoto was the commander-in-chief during the early years of the Pacific War and was responsible for major battles including Pearl Harbor and Midway. On the morning of April 18th, Isoroku Yamamoto took off for an inspection tour in the Solomon Islands when his plane was shot down by First Lieutenant Rex T. Barber. Yamamoto’s body was found the next day. His death was a major blow to the morale of the Japanese military during WWII.