“Before we’re through with ‘em, the Japanese language will be spoken only in hell.” – Admiral Halsey (December 1941) 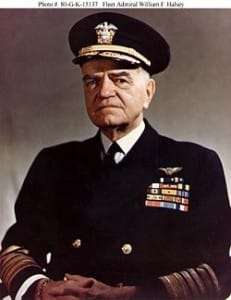 Fleet Admiral William “Bill” or “Bull” Halsey, Jr. (10/20/1882 — 08/16/1959) was the commander of the U.S. Third Fleet during part of the Pacific War again Japan. During the attack on Pearl Harbor Vice Admiral Halsey was at sea in his flagship, USS Enterprise. It is rumored that upon learning of the attacks he made the remark, “Before we’re through with ‘em, the Japanese language will be spoken only in hell.” His contempt for the Japanese was used to boost morale of officers and sailors under his command. Several slogans, including “Kill Japs, Kill Japs, Kill More Japs!” and “The more of the little yellow bastards you kill, the quicker we go home!” were attributed to Halsey. He was promoted to Fleet Admiral in December 1945 and retired from active duty in March 1947. Admiral Halsey died August 16, 1959 and is buried in Arlington National Cemetery.