Approximately  50,000 Sherman’s were produced, the M4 Sherman is one of the most iconic WW2 tanks, and of  all military history. The design stemmed from a need to fit a 75mm dual purpose cannon, capable of engaging both other tanks and dug-in infantry, inside a fully traversing turret. Its predecessor, the M3 Lee, had a cannon of the same caliber in a sponson (limited traverse), restricting its ability to engage the enemy. 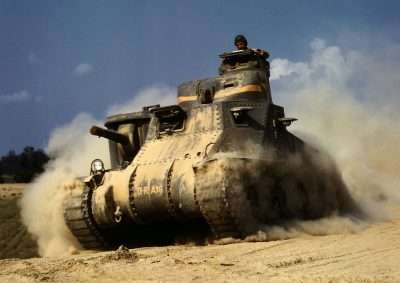 The M4 Sherman was not the best tank of the war but a balance between speed and armor. The ease of manufacture, transport on train and ease of shipping overseas in large numbers, as well as large production numbers were the advantages of the Sherman. Although an American tank, the first Shermans to see combat actual did so with the British army in North Africa.  At the time, its armor and armament were suitable against the German Panzer IIIs and early Panzer IVs it came up against and its mechanical reliability proved to be outstanding. 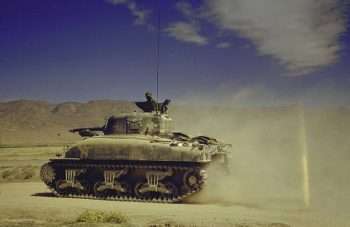 The M4 Sherman was a balance of  strength and weakness. At close to 10ft tall, necessary to fit the suspension system and the engine, it was a large target for a medium tank. Its narrow tracks were liable to bog down in sand, mud and snow. In early models, the infantry weren’t able to communicate with the tank crew. In later variants of the M4 this was solved by installing a phone on the outside of the tank that was connected to the intercom system.

Early versions also earned a reputation for burning when getting hit, since much of the ammo was stored along the tank’s side inside. This problem earned the tank the nickname Ronson (after the popular cigarette lighter from the 40’s) and Tommy cooker among both Allied and German troops. This problem was solved by the addition of wet stowage: the rounds were moved elsewhere and surrounded by small containers of a liquid dousing agent, which when a long way in preventing fires. 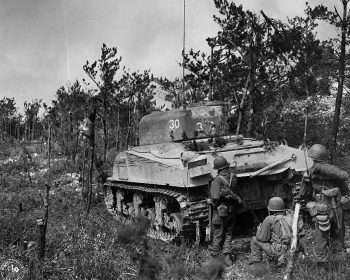 By early 1944, the Sherman was getting a bit long in the tooth, with neither its gun nor its armor a match for late Panzer IVs, Panthers and Tigers. After D-Day, the thick hedgerows of Normandy offered the Germans plenty of cover and concealment  to ambush armor with anti-tank guns and the Panzerfaust. Tank crews started tacking on extra armor in the form of plates scavenged from destroyed vehicles, sand bags, concrete, spare track links and wood. The extra weight strained and overheated the engine and a study found the makeshift defenses didn’t provide enough extra protection. As a consequence, General Patton had the practice banned in the 3rd Army. 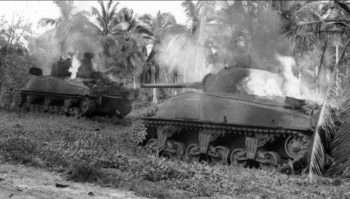 The M4A3E2 “Jumbo,”  was the upgrade that was fielded in the spring of ’44 to address the Sherman’s short commings. The Jumbo had additional armor plates welded on and was used to assault fortified enemy positions and to stay at the front of a formation and attract German fire. Arriving in Europe in the fall of 1944, it was considered a successful design, even though the extra weight could cause the front suspension to fail on rough terrain if the tank’s nose dipped down too sharply. 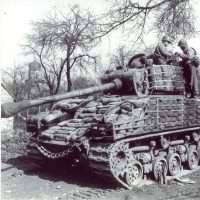 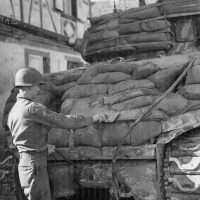 Close on the heals of the M4A3E2 “Jumbo”  the M4A3E8, the “Easy Eight,” was fielded. The “Easy Eight” had improved suspension and was equipped with a new hight velocity 76 mm gun,  giving  them much better penetrating power. The Easy Eight could finally penetrate the frontal armor of Panthers and Tigers from a reasonable range, but the same range still allowed the German heavy tanks to still take out the Easy Eights.

A British modification  of the Sherman enabling it to fight Panther’s and Tigers on a more even foot, was the Sherman “Firefly.” The British designers converted the turret to be able to house the superb but large Quick-Firing 17-pounder anti-tank gun. The flash from this gun alone was so strong that the gunner and the commander had to blink during firing to avoid getting blinded. Additionally, the flash would sometimes set vegetation in front of the tank on fire. The Firefly was a terror of German heavy tanks, but its long barrel made it conspicuous and a prime target for the enemy. Many tank crews put camouflage paint on the muzzle to make it look as shorter and appear as an old 75 mm. 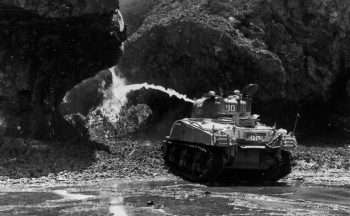 The Sherman became the base for many modifications. Some were armed with a 105 mm howitzers, which was better at taking out defensive fortifications than the anti-tank  76 mm cannon. Such Shermans were often paired up with flamethrower versions in the Pacific and used to devastating effect against Japanese fortifications.

Other Sherman versions were used for D-Day. These included the Duplex Drive amphibious Sherman, which “wore” a canvas skirt that gave it buoyancy, and various bridge-layer, mine-clearer and other engineering-oriented variations, many of which the creation of Hobart’s Funnies. 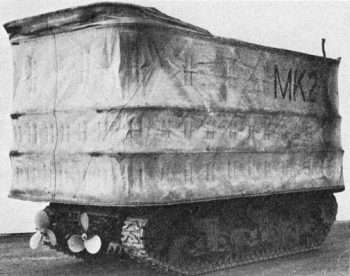 Of the Sherman’s various rocket launcher-equipped versions, the one carrying the T34 Calliope is the most famous. Capable of firing 60 rockets in a very short span of time, it could saturate an area with explosions and shrapnel, while the screaming sound of the incoming barrage was often enough to send the enemy running.

The basic chassis of the Sherman was also used for a variety of tank destroyers and self-propelled guns. A fully modernized version, the M51 Super Sherman, even saw service with the Israeli army, where it acquitted itself well in the 1967 and 1973 wars.