Advance elements of the BEF begin to a arrive in France. 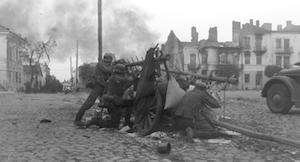 Hermann Goering boasts that Berlin will never be bombed by the enemy.

1942
Hitler sacks Field Marshal List and takes personal command of Army Group A in the Caucasus, which having been foiled by the Red Army in the western Caucasus, was now meeting increased resistance in its drive towards Astrakhan and Baku.

Open pit burning of bodies begins at Auschwitz in place of burial. The decision is made to dig up and burn those already buried, 107,000 corpses, to prevent fouling of ground water.

A Japanese float plane, launched from a submarine, makes its first bombing run on a U.S. forest near Brookings, Oregon, in retaliation for the Doolittle Raid on Tokyo. Newspapers in the U.S. voluntarily withhold this information.

1943
The U.S.Major League Baseball commissioner announces that the 1943 World Series will be filmed and a twenty-two minute highlights film will be distributed to the armed forces in the European and Pacific theaters.

All Italian forces within the German-controlled areas of Italy, southern France, Yugoslavia, Albania and Greece are disarmed without opposition and made prisoners of war. Operation ‘Avalanche’ sees the U.S.

Fifth Army land at Salerno, South East of Naples. Taranto is occupied by the British without resistance.

Formation of an anti-Badoglio, Republican Fascist Government is formed in northern Italy.

The Italian fleet leaves Spezia in Northern Italy, en route for Malta, where it surrenders to the Royal Navy.

Iran, under pressure from the allies who occupy the country, declares war on Germany.

After being hit by 133 RAF bombs and rockets the day before, the Italian pre-war luxury liner RexÂ capsizes and sinks off Trieste, where it had been mothballed for much of the war. The Rex was the only Italian ship ever to hold the North Atlantic “Blue Ribbon” for the fastest trans-Atlantic crossing.

Take a look a these other WW2 Posts: