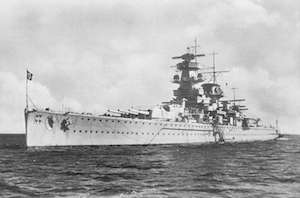 The German pocket Battleships, Graf Spee and Deutschland, which had sailed from Germany in August, are given orders to attack allied shipping in the Atlantic.

Polish government-in-exile set up in Paris.

Warsaw, besieged for more than two weeks, surrenders after continuous air and artillery bombardments. Near Grabowiec, 150 Polish policemen, 4 NCOs and 6 officers among 5,000 taken prisoner, are executed by the Soviets.

Japan signs the tripartite pact with Germany and Italy, hoping to deter the USA from interfering in its affairs. However, this step had the opposite affect as the USA now saw Japan as siding with the aggressors.

1941
The first liberty ship, the ‘Patrick Henry’ is launched at Baltimore naval dockyard.

The first of the autumn rains fall and quickly turns the Russian ground to mud.

23,000 Jews killed at Kamenets-Podolsk, in the Ukraine.

After more than 3 months of fighting, British forces in Abyssinia capture the Wolchefit Pass, thereby opening the route to Gondar, the last Italian held town in East Africa.

1942
The 6th Army succeed in capturing most of the strategic Mamayev Kurgan hill and penetrates the heavily defended Red October and Barricades housing estates.

Australian forces defeat the Japanese on New Guinea in the South Pacific.

1943
The Germans begin a General withdrawal of all forces in the Ukraine to positions on the west bank of the Dnieper river. Russians take the last German held port on the Black Sea, at Temyruk.

The first of two heavy air raids against Wewak is conducted by the 5th AAF, with 64 Japanese planes and seven ships destroyed.

1944
Thousands of British troops are killed as German forces rebuff their massive effort to capture the Arnhem Bridge across the Rhine River in Holland.

After nine days of heavy fighting, the British are able to rescue their “lost division”–the first airborne paratroopers who have been trapped behind enemy lines. Their German opponents praise the paratroopers, calling them “the highest-qualified men we have met during the entire invasion campaign”.

It is announced that the first British jet fighter, the ‘Gloster Meteor’ was successfully used in action on the 4th August.

2,000 Poles of the Home Army surrender in Mokotow district of Warsaw.