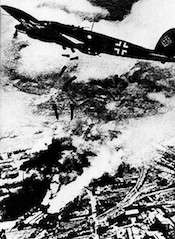 Churchill claims the U-boat menace has been overcome, but U-48 sinks the steamer Royal Sceptre and casts its crew adrift 300 miles from land.

The Luftwaffe bomb Warsaw with 420 planes. Casualties in the city since the start of the war have now reached 40,000 dead.

Court martial body set up in Vichy France for crimes against the state; no appeal allowed executions within 24 hours of sentencing.

Reich-Commissioner in Norway deposes King Haakon and the Administrative Council, declaring the government illegal. All political parties are dissolved except for Quisling’s pro-Nazi party, the Nasjonal Samling, which is installed as the government of Norway.

An attack by Free French forces landed by ships of the Royal Navy against the west African port of Dakar is repulsed by Vichy French troops.

The US cryptanalyst, Harry L Clark, discovers the key to the Japanese top secret codes, allowing the US to read Japanese diplomatic, naval and military to top secret coded traffic.

1941
Hitler orders all attacks by Army Group North on Leningrad stopped and the city to be besieged and starved-out. After its foreseen surrender, the city is to be leveled.

Rommel, having discovered that their wasn’t a British fuel dump at Sidi Barrani and believing that that British had taken up a purely defensive posture, withdrew the 21st Panzer Division back to the Libyan-Egyptian border.

1942
The War Labor Board orders equal pay for women in the United States.

Tokyo and Berlin announce that German U-boats and Japanese submarines will be working together in the Atlantic Ocean.

1943
The Russians capture Smolensk and Roslavl, over 200 miles to the West of Moscow.

1944
The Canadians begin all-out attack on the German stronghold at Calais.

Hitler orders the formation of the Volksturm, the German home guard.

Vidkun Quisling’s Ministers urge the Germans to end the occupation of Norway.

1945
The Nazi party is officially declared illegal in Germany.

The last Russian soldier leaves Norwegian territory near Storskog at 20:55.