1939
Germany and Russia agree on partition of Poland. 217,000 Polish troops who are fighting against the Red Army surrender at Lvov. The NKVD begins rounding up thousands of Polish officers and deporting them to Russia where they will be executed a year later in the forest of Katyn near Smolensk. A Polish regiment repels attacks by forty Soviet tanks and infantry units at the Battle of Kodziowce. Soviet losses amount to hundreds killed and twenty tanks destroyed.

1940
Moscow Radio reports that RAF bombing has largely destroyed the German invasion fleet along the Channel.

1942
The 6th Army and 4th Panzer Army split the Soviet 62nd Army in two and capture nearly the entire southern part of the city, including the huge grain elevator which was successfully defended by 40 Soviet marines for over a week.

The British 78th Division begins landings at Bari on the South East coast of Italy.

Troops of the 9th Australian Division land near Finschhafen in New Guinea. 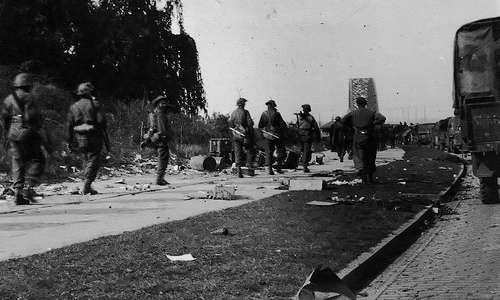 The British Second Army is now five miles North of Nijmegen, but still six miles from Arnhem. The U.S. First Army halts its offensive West of Aachen. German troops holding out in the port city of Boulogne finally surrender to Canadian forces.

The Russians occupy Tallinn and Reval in Estonia.