Sweden issues a declaration of neutrality. German Ministers at Stockholm, Sweden, and Oslo, Norway, give a declaration that Germany would respect the integrity of Sweden and Norway.

Failure of a last-minute effort by Mussolini to find a peaceful solution of the German-Polish conflict.

The Luftwaffe raids Warsaw. German troops capture the Jablunka pass in the Tatra mountains. Fighting continued for the strategic island of Westerplatte at the mouth of the Vistula River. A massive attack was launched by 60 Stuka divebombers of the II and III Stukageschwader Immelmann directed at crushing the island garrison. The air assault was not directly followed up by a German attack from the ground and the Poles were able to reorganize their defenses. German aircraft bomb railway station at Kolo, killing 111 refugees.

The Germans start construction of Stutthof concentration camp in which 65,000 Polish Christians will ultimately perish. 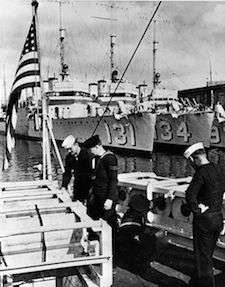 “Destroyers for Bases”: Roosevelt and Churchill agree to trade 50 old US destroyers for 99-year leases on British bases in Bahamas, Antigua, Trinidad, Jamaica, British Guiana, St. Lucia, as well as land in Bermuda and Newfoundland; Roosevelt bypasses Congress in the deal.

1941
RAF daylight raids on Occupied Europe miss only 19 days in August and September.

General Sir Claude Auchinleck issues his first directive in respect to the forthcoming British Offensive, ‘Operation Crusader’, by ordering General Sir Alan Cunningham to produce a plan for the relief of Tobruk and the re-conquest of Cyrenaica.

1943
A special order of the day from Stalin announces the Russian victories on Voronezh, Bryansk, Donets and Sea of Azov fronts.

The allies cross into Belgium.

The Germans begin to evacuate the Aegean Islands.

1945
The formal Japanese surrender takes place aboard the USS Missouri in Tokyo Bay.