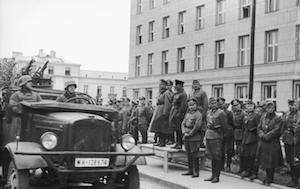 1941
Russians conscript all men aged 16 – 50. Units of Army Group South capture Poltava in the Ukraine. The Russians evacuate Kiev, but the ‘fight to the death’ continues in the area for a week.

1942
The RAF’s Pathfinder Force flies its first mission, which is against Flensburg.

Reduction of food rations for Jews in Germany.

In spite of intense pressure from U-boats and the Luftwaffe, convoy PQ-18 reaches Murmansk. Its losses amounted to 1 destroyer, 1 minesweeper and 13 merchant ships. In return for this the Germans lost 3 U-boats sunk and 5 damaged, along with 41 aircraft destroyed.

The Russians launch an offensive on the Voronezh front, 250 miles North west of Stalingrad.

British forces land on the east coast of Madagascar and occupy Tamatave.

Donato Carreta, Mussolini’s director of prisons, is hauled from a courtroom in Rome by an angry mob. The crowd beats Carreta and throws him into the Tiber river, chases him down the river in rowboats and beats him to death with oars.