1935
In Berlin, the Reich under Adolf Hitler adopts the swastika as the national flag.

1937
Prime Minister of England Neville Chamberlain flies to Germany to discuss the future of CzechoslovakiaÂ with Adolf Hitler.

1939
The Polish submarine Orzel arrives in Tallinn, Estonia, after escaping the German invasion of Poland.

Gdynia is captured by German forces. A Polish breakout attempt from the Kutno pocket fails.

The Australian Government announces the creation of a 20,000 strong defense force.

1940
The climax of the Luftwaffe’s daylight raids against the London docks is reached with the Luftwaffe’sÂ biggest raid on London so far. The British originally claim 185 Germans aircraft shot down, but laterÂ revise this to 56 German and 26 RAF planes lost.

1941
The US Navy begins to take over the convoying of British ships as far as Iceland, which seen as anÂ un-neutral act by the German government.

German soldiers attacked in the Champs Elysees in Paris.

A Japanese submarine torpedo attack near the Solomon Islands results in the sinking of the Carrier WASP, and damage to the Destroyer O’BRIEN and Battleship NORTH CAROLINA.

1943
Mussolini proclaims his return to power and re-establishes fascism in northern Italy. The Axis is resumedÂ and the death penalty introduced for all Italians carrying arms in German occupied areas.

The Chinese government announces that the Japanese have offered to pull out of China, except for Manchuria and Formosa, but only if the Chinese will switch their support to the axis.

1944
Twenty-seven RAF Lancaster bombers from an airfield in Northern Russia pound the Battleship Tirpitz with 12,000lb Tall Boy’ bombs in Kaa Fjord, Norway, scoring a direct hit through the Tirpitz’s forecastle and burst deep in her hull.

The U.S. First Army reaches the Siegfried Line, to the East of Aachen and less than 40 miles west ofÂ Bonn. Maastricht and Eysden in southern Holland liberated. The US First Army occupies Nancy.

All the V bomb launch sites are neutralized is southern Holland.

The Germans start a new flying bomb campaign, launching them from aircraft over Holland. 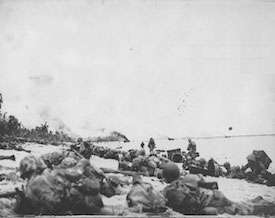 The Red Army achieves a breakthrough at Narva.

US Marines land on Peleliu Island in the Pacific, but suffer 1,100 casualties trying to establish aÂ\ shallow beachhead.

1945
The fifth anniversary of the Battle of Britain, sees 300 RAF aircraft fly over London.