60,000 Polish troops who are trapped in the Radom pocket surrender. 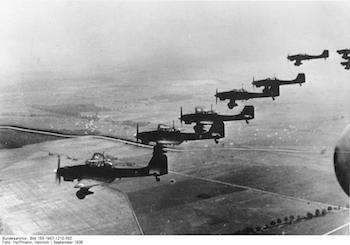 Stained glass in Notre Dame Cathedral in Paris is removed for safekeeping.

5 Italian divisions and 200 tanks in Cyrenaica under Marshal Graziani, cross the Libyan/Egyptian border and advance toward Sidi Barrani in Egypt. The 7th Armoured and 4th Indian Divisions have orders to withdraw as far as Mersa Matruh and then stand and fight.

1941
German High Command announces that Russian POWs will get less rations than other nationalities.

British desert raids reach Benghazi and Barer. A combined forces attack on Tobruk is also made.

On Guadalcanal, Japanese try to seize Henderson Field, but fail.

1943
Heavy German counter-attacks by six divisions round Salerno, forces the Fifth Army back to within five miles of beaches. The allies consider an evacuation. The battle for supremacy in the Aegean begins with an Allied raid on Rhodes. WATCH VIDEO

1944
The U.S. Ninth Army is engaged in heavy fighting as the German garrison keeps up its resistance at Brest.

The Canadians take Coriano Ridge in the Gothic Line.

The Russians reach the Polish-Czechoslovak border. The Romanians sign an Armistice with the Russians.