In response to the invasion of Poland, the French Army advances into Germany. On this day they reach their furthest penetration-five miles.

The battle of the Vistula bend flares up near Kutno, the last major engagement of the Polish campaign. The Luftwaffe bombs Krzemieniec.

Convoys for merchant shipping are established to counter the U-boats.

Italian forces begin an offensive into Egypt from Libya.

The first snow reported on Russian Front. German forces in the Kremenchug bridgehead across the Dnieper in the Ukraine and advance north to aid in the encirclement of Kiev. 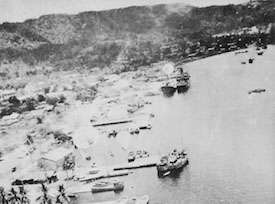 Convoy PQ-18 consisting of 41 merchants sets sail from Loch Ewe in Scotland bound for Murmansk. Since the slaughter of PQ-17 in July the escort system had been radically overhauled, meaning that this convoy had among others and the escort carrier HMS Avenger and 16 destroyers to protect it.

1943
Soviet Deputy Foreign Minister Vladimir Dekanozov arrives in Stockholm on an ill-defined mission. Tipped off that the Russians were open to discussing possible peace terms with the Third Reich, German Foreign Minister Von Ribbentrop pleads with Hitler that he be allowed to dispatch an envoy to at least hear what terms Stalin might be willing to offer. Hitler, however, refuses the request and Dekanozov departs for Moscow after waiting four days.

Mussolini, held prisoner by the Badoglio government on the Gran Sasso, is rescued by German paratroopers who land in gliders on top of the mountain. SS major Otto Skorzeny, leads a daring glider attack on the hotel where Mussolini is being held. The Duce is freed and taken to Germany. Hitler signs decrees appropriating Italian industry for German uses as well as annexing the German-speaking regions of northern Italy to the Greater German Reich. The latter violates the undertaking Hitler gave to Mussolini in 1940 that Germany had no territorial ambitions south of the Brenner Pass.

German troops evacuate Rhodes and other Greek islands in the eastern Mediterranean.

A German-Hungarian counter-offensive grinds toward Arad and Temesvar in Hungary.

1945
Mountbatten accepts the surrender of all Japanese troops in Southeast Asia.