Polish submarines ordered to break through to Britain or to be interned in Sweden.

1941
Charles A. Lindbergh sparked charges of anti-Semitism with a speech in which he blamed ”the British, the Jewish and the Roosevelt administration” for trying to draw the United States into World War II.

German order of the day says Leningrad must be taken quickly, regardless of cost. Zhukov takes command of city.

US freighter “Montana” sunk en route to Iceland, none killed.

German officers captured by the Red Army since the start of the war, form an anti-Hitler association, called the “Bund Deutscher Offiziere”.

The 15th Scottish Division crosses the Dutch border, east of Antwerp. A bridgehead is established across MeuseEscaut canal.

The U.S. Third Army captures a large part of Maginot Line intact and reach the German border at Trier on the Moselle river.

US First Army reaches Siegfried Line at German border. At Saulieu, France, official contact is made between Overlord forces (landed in Normandy 6/6/44) and Dragoon forces (landed in southern France 8/15/44); Allied front now runs from the English Channel to the Swiss border to the Mediterranean. 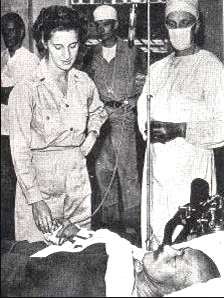 Take a look at these other WWII Articles: