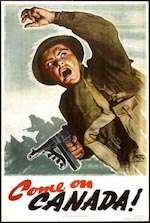 After a formal parliamentary debate, Canada declares war on Germany.

German troops achieve a breakthrough at Kutno and Sandomir and reach the Vistula.

Hitler decides to postpone Operation Sealion until the 24th September.

The British and Russians demand that Iran expels all Axis nationals with 48 hours.

Japanese begin war games at the naval college in Tokyo in order to develop their strategy for theÂ Pacific.

1943
After weeks of prodding by Goebbels, Hitler consents to make a short radio broadcast to the German peopleÂ on the dramatic events of the summer, particularly in Italy. After paying tribute to his fallen partnerÂ Mussolini, Hitler warns his enemies that getting rid of him will not be nearly so simple.

German troops occupy Rome and disarm all Italian troops in Italy and Greece.

The US First Army occupies Luxembourg.

The British make an unopposed landing on the Greek Island of Kythera off the Peloponnese. The Russians enter Sofia, the capital of Bulgaria.

In Italy, US Fifth Army launches offensive on Gothic Line toward Bologna.

The U.S. Navy begins a two-day bombardment of the Palau Islands in the Pacific.

1945
Vidkun Quisling, the Norwegian Nazi leader, is sentenced to death in Oslo.