1939
Convoy OB-4, sailing from Liverpool to North America, is attacked by U-31 (Johannes Habekost), becoming the first “clear” convoy contact in British waters of the war. U-31 sinks 1 ship, the 4,060-ton British freighter Aviemore. 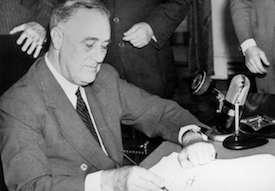 President Roosevelt signs the Selective Service Training and Service Act: men aged 20-36 are required to register for the draft.

Italian advance in Egypt continues with occupation of Sidi Barrani, 60 miles from frontier. At this pointÂ the Italians halt their offensive and begin to construct a number of fortified camps.

1941
The US announce that it will provide escort for ships carrying Lend-Lease material up to 26Â°W, whichÂ meant that clashes with U-boats would become more likely.

The Shah of Iran abdicates and his son, Crown Prince ‘Mohammad Reza Pahlavi’ takes over.

1942
The Women’s Airforce Service Pilots (WASPS) are established in the U.S.. The armed forces will beÂ supplied with more than 1000 auxiliary pilots through this organization.

The Governor General of Madagascar asks for an armistice.

The Japanese base at Kiska in the Aleutian Islands is raided by American bombers.

1943
The Dambuster squadron makes a disastrous first use of 12,000lb ‘Tall Boy’ bombs with a raid on theÂ Dortmund-Ems canal.

In a sign of the increasing confidence and audacity of the French Resistance, Julius Ritter, an aide toÂ Nazi Labour Minister Fritz Sauckel, is shot to death in broad daylight on the Etoile in Paris. FiftyÂ Frenchmen are taken hostage and executed by the Nazis in reprisal.

British occupy Leros in Aegean. German counterattacks against the U.S. bridgehead at Salerno are halted.

Tito’s partisans are reported to have captured Split on Yugoslavia coast.

The Black Sea port of Novorossiysk is captured by the Russians after a week of amphibious and landÂ operations.

1944
Conclusion of the Quebec meeting between Roosevelt and Churchill who sign off on the Morgenthau Plan for the treatment of post-war Germany.

Dr. Goebbels exhorts all Germans to resist with the utmost fanaticism.

Over objections from his top generals, Hitler decides to launch a counteroffensive through the Ardennes region of Belgium in an attempt to stop the Allied advance on the western front. The result will be the Battle of the Bulge.

The British make am unopposed landing on the Greek Island of Kythera off the Peloponnese. The Russians enter Sofia, the capital of Bulgaria.