1939
Chamberlain announces committee of ministers to co-ordinate the economy.

Hitler issues orders for the invasion of France and the Low Countries. This first plan called for the German Army to wheel through Belgium as they had done during World War One, although this time they were to invade Holland as well. Only the start date wasn’t specified, although Hitler was thinking of November. However, bad weather and demands by his generals for more preparation time caused postponement until the following year.

1940
Churchill is unanimously elected leader of the Conservative Party.

1941
President Roosevelt in a message to Congress urges the repeal of Section 6 of the Neutrality Act which would allow the arming of U.S. merchant ships against “the modern pirates of the sea”, the U-boats.

Hitler announces that the war in the East, for all intents and purposes, has already been decided in favour of the Reich.

1942
The Red Army ends its system of dual leadership by abolishing the position of the Communist political commissar in favor of a single military commander in its various units.

Nazi leader Martin Bormann rules that “the permanent elimination of the Jews….can no longer be carried out by emigration” but must proceed “by the use of ruthless force in the special camps of the east”.

1943
The Russians now control the Kuban peninsula on the Black Sea, after the successful evacuation of all German and Romanian troops into the Crimea.

1944
The 1st Bulgarian Army attacks towards Nis in Yugoslavia.

Admiral Nimitz decides to invade the island of Iwo Jima, 700 miles to the South of Japan.

The Fourth Moscow Conference opens between Churchill and Stalin. 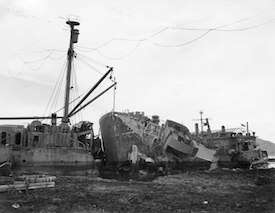 Typhoon Louise hits Okinawa, killing 36 and destroying hundreds of US ships, the most damaging storm encountered by the US Navy.