1939
RAF reconnaissance planes shoots down a German flying boat over the North Sea.

The American cargo ship “City of Flint” and its crew are captured by a German warship, despite the fact that the United States and Germany are not at war. The American sailors are eventually freed when the Germans are forced to dock in Norway.

An SS unit executes 20 Poles in the Jewish cemetery in Swiecie. 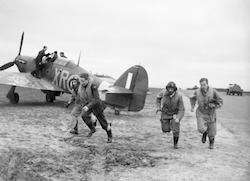 Churchill makes statement to Commons and claims that the Germans have the capability to ‘throw 500,000 men onto salt water or into it’.

Another heavily escorted supply convoy sets sail for Malta from Alexandria. However, bad weather stops the Italian fleet from putting to sea and the convoy arrives safely. Only the escorts return trip to Alexandria, they are attacked by a force of Italian Destroyers and Torpedo boats.

No casualties are suffered by the Royal Navy, but the Italians lose 2 destroyers and 2 TorpedoÂ boats sunk and 1 Destroyer damaged.

Churchill makes statement to Commons that the Burma Road is to be reopened.

1941
In a letter to Stalin, President Roosevelt promises U.S. military aid to the Soviet Union.

1942
The final plans for the invasion of Northwest Africa (‘Operation Torch’) are issued.

Strong Japanese rearguard action against the Australians at Templeton Crossing on the Kokoda Trail in New Guinea.

1944
Units of the U.S. Ninth Army reach the outskirts of Aachen on the German border.

1945
Rudolph Hess is flown from England to Germany to stand trial.

President Harry S. Truman announced that the secret of the atomic bomb would be shared only with Britain and Canada.

1945
Nazi Rudolf Hess (who stole plane May 10, 1941 and flew to Scotland in unauthorized attempt to negotiate peace with Britain) is flown from England for Nuremberg Trials.