1939
After a 2 day battle against Soviet tanks and planes and then a 5-day fight against the Germans.

Hitler in a speech to the Reichstag announces the victorious conclusion of the Polish campaign and calls upon Britain and France to cease hostilities and come to terms with Germany. This is rejected by both the British and French government’s.

Proclamation by Hitler on the isolation of Jews.

1941
Churchill gives a personal undertaking to Stalin to send a convoy every ten days to Russia’sÂ northern ports.

1942
The setting up of a UN commission to investigate war crimes is announced in Washington.

The III Panzer Corps captures Malgobek at the bend of the Terek river in the Caucasus.

Montgomery issues the final plan to senior commanders for the Second battle of El Alamein. 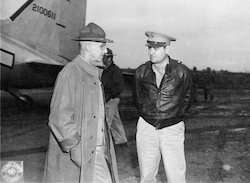 The Canadian 3rd Division attacks the Breskena Pocket, South of the Scheldt.

A Russian offensive by 64 divisions, 750 tanks and 1,100 aircraft commences near Arad in Hungary, with the aim of destroying Army Group South.

US General Joseph Stilwell recalled from position as Chiang Kai-shek’s chief of staff, maintains command over troops in Burma.

1945
General George Patton prepares to turn over command of the Third Army to General Lucian K. Truscott. Patton is relieved of the command because he is believed to be favorably inclined toward the Germans, as well as anti-Semitic. Patton later claims he was “done to death by slanderous tongues”.