1939
German U boat U-56 fails in attack on battleship HMS Nelson with Winston Churchill, Dudley Pound, and Charles Forbes aboard.

1940
RAF Bomber Command is given its first directive sanctioning area-bombing.

1941
The worsening weather and seas of mud bring the German offensive against Moscow almost to a standstill. This gives the Red Army precious time to reinforce their defenses in front of Moscow.

1942
The completion of the Alcan Highway is announced–1,671 miles of road connecting Dawson Creek, British Columbia, and Fairbanks, Alaska. The road will be used to transport supplies and troops to U.S. military bases in Alaska.

At El Alamein, Australians push north to the sea, trapping enemy force, most of which escapes west.

Germans remove 100 Jewish children from a children’s home in Brussels, Belgium for deportation, but public outcry leads to their return.

1944
In the Vosges mountains in France, US 442nd Infantry Regiment (Nisei—Japanese-Americans) rescues the Lost Battalion with heavy losses. 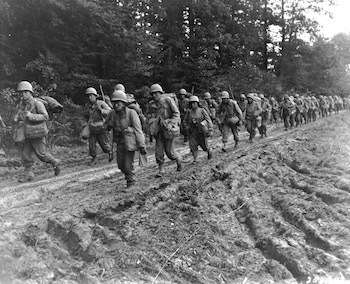 The Debrecen counter attacks end with the Germans claiming that they have inflicted 25,000 casualties and destroyed 600 tanks. However, this doesn’t hinder the Red Army begins a major offensive in to Hungary.

The gas chambers at Auschwitz are used for the last time.