1940
A blindfolded secretary of war draws the first number – 158 – in the Selective Service draft. (Not all men are willing to register. In one case, a man goes to his draft board posing as his own widow to announce his death.) 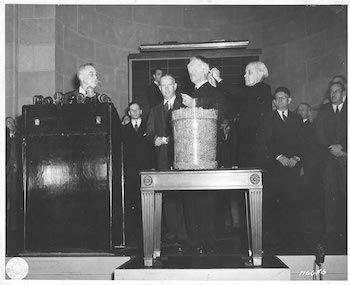 British troops set sail for Crete. Italians claim to have made some advances but Greeks hold most positions.

Conscription begins in the U.S. It is the first military draft to occur during peacetime in American history.

1941
Germans troops advance in strength, down in to the Crimea, forcing the Russians to fall back in to Sevastopol.

1942
The Germans capture Nalchik in the Caucasus, only 50 miles from the Grozny oil fields.

The US retains control of all their positions on Guadalcanal. An Australian force completes the evacuation of the Templeton Crossing positions in New Guinea.

The Japanese fleet forced to retreat in the Solomons.

German troops under Rommel make a heavy attack against Australians on the northern flank.

US completes construction of Alcan Highway, connecting Alaska to the “Lower Forty-Eight” , officially opened on November 26, 1942

In the United Kingdom, leading clergymen and political figures hold a public meeting to register outrage over Nazi Germany’s persecution of Jews.