1940
London has longest air raid to date as a Catholic orphanage is among the buildings hit. British claim 41 German planes shot down in the past weekÂ against 21 British. The total German losses over Britain since the war began are put at a staggering 2,762 against Britain’s 780.

The Italians protest to the Greeks about their ‘non-neutral’ attitude towards Italy.

The Eighth Army begins re-grouping its divisions at El Alamein for the final breakout, and take Kidney Ridge.

Battle of Santa Cruz, with US forces attacking the large Japanese supporting fleet near Guadalcanal and shooting down 100 aircraft, damaging twoÂ carriers, a battleship and three cruisers. U.S. Navy aircraft carrier Hornet is heavily damaged during the Battle of Santa Cruz.

The USS South Dakota knocks down twenty-six Japanese planes during the Battle of Santa Cruz, setting the record for the most enemy planes downed in one day.

The First American Red Cross Clubmobiles begin service to US troops in Britain.

1943
The RAF launches a heavy night raid against Stuttgart, while the US 8th Air Force, in its greatest effort to date, delivers a devastating daylightÂ attack on Bremen.

A hospital ship arrives in Liverpool with 790 wounded POW’s aboard, repatriated from Germany.

A feint landing on Choisseul in the Solomon’s is conducted by US forces. Meanwhile Treasury Island is occupied.

1944
The Battle of Leyte Gulf concludes with a decisive US victory, despite heavy Japanese kamikaze attacks; this battle marks the virtual collapse of the Japanese Navy. 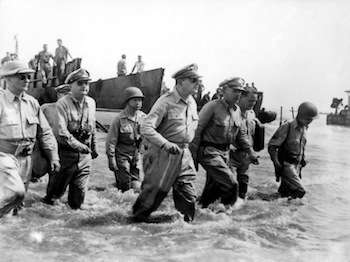