As war heats up with Germany, the British war cabinet holds its first meeting in the underground war room in London.

The Germans start deporting Poles from Posen (Poznan), largest city of western Poland (250,000 people), in their attempt at establishing “pure and Germanic provinces” in Poland.

President Roosevelt establishes an advisory committee on the use of uranium.

1940
Churchill broadcasts to France, ‘Frenchmen rearm your spirits before it is too late.’

1942
The South Africa Premier, Field-Marshal Smuts, makes a historic speech to both Houses of Parliament saying, ‘The stage is set for the last, the offensive stage’. 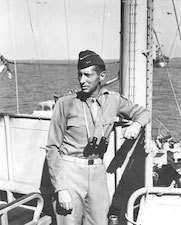 General Mark Clark lands by sub at Cherchel, Algeria for clandestine meeting with Vichy French in preparation for the upcoming Allied invasion.

1944
Aachen finally falls to the U.S. First Army, earning the distinction of being the first German city to be captured. 12,000 German prisoners have been taken since the 2nd October. Breskens is captured by the Canadians, but fighting continues for 10 more days in the pocket.

1945
The U-boat pens in Hamburg are blown up by British Engineers using German explosives.