1938
Winston Churchill comments to Prime Minister Neville Chamberlain about the Munich Agreement; “You were given the choice between war and dishonor. You have chosen dishonor and you will have war.”

1939
The first Poles are imprisoned in Pawiak Prison in Warsaw. Some 100,000 people will undergo Nazi interrogations here, of whom 37,000 will be executed and 60,000 sent to concentration camps.

Act of Panama signed by US and other western hemisphere nations, declaring Pan-American Security Zone, a 300-mile zone of neutrality off coast of Americas (at about 60˚ W).

1941
Army Group Centre launches operation ‘Typhoon’, the main offensive towards Moscow. Hitler tells his troops: ‘Today is the beginning of the last great battle of the year’. Army Group South begins an advance against Kursk and Kharkov.

1943
The RAF launches a very heavy air raid on Munich, which lasts 25 minutes.

The British 2nd Special Service Brigade lands at Termoli on East coast of Italy and links up with troops moving North from Foggia. 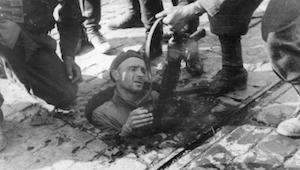 Warsaw falls to the Germans after 63-day siege, with the Polish Home Army surrendering only after all its food and ammunition had run out. The Germans recognize their valor and treat the survivors not as partisans, but as regular POWs.

Martial law is lifted in Hawaii.

1945
General Patton is removed from command for remarks that were allegedly sympathetic to former Nazis.