Italy demobilizes 300,000 soldiers for the harvest, leaving only 100,000 for upcoming invasion of Greece.

1941
Odessa, a Russian port on the Black Sea which has been surrounded by German troops for several weeks, is evacuated by Russian troops.

4,500 Japanese troops land as reinforcement for Guadalcanal as battle continues. 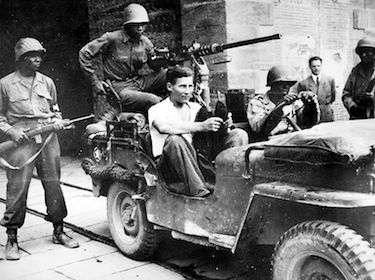 US begins rationing of fuel oil for heating in the East and Midwest.

British forces liberate Greece,which then erupts in a cival war between monarchists and communists.

The Hungarian chief of state, Admiral Horthy, shortly after announcing Hungary’s withdrawal from the war against the Russia, is taken prisoner by a commando unit led by SS major Otto Skorzeny. A new government under Ferenc Szalasi vows to continue the alliance with Germany.

Deportation of Jews from Hungary resumes after a temporarily halt due to international political pressure to stop Jewish persecutions.

The British and Chinese begin an offensive from Myitkyina to Bhamo in northern Burma.

1945
Vichy French Premier Pierre Laval is executed by a firing squad for his wartime collaboration with the Germans.

1946
Nazi war criminal Hermann Goering poisoned himself hours before he was to have been executed.