1940
President Roosevelt in a fireside chat suggests the drafting of 18 and 19 year old men.

Hitler postpones invasion of Britain until the spring 1941.

U-101 torpedoes and sinks the merchant ship Saint-Malo south of Iceland. The ship was a former French vessel requisitioned by the CanadianÂ government. 28 are killed.

A German military mission is set up in Bucharest, Romania, for the purpose of aiding in the training of the Romanian Army.

1942
Attorney General Francis Biddle announced that Italian nationals in the United States would no longer be considered enemy aliens.

1943
The Heaviest RAF attack so far on northern Italy, with more than 1,000 tons dropped on Milan in under 30 minutes.

The U.S. Fifth Army begins an offensive along the Volturno river in Italy.

1944
The Germans fall back across the Lower Rhine, west of Arnhem.

The Germans manage to hold line of the Niemen to cover East Prussia. 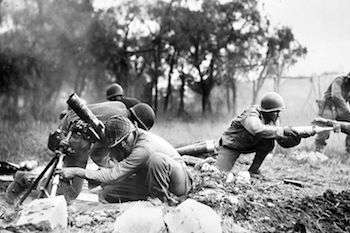 In Italy, Buffalo Soldiers of US 92nd Infantry Division breach Gothic Line, the only black unit to see combat in Europe.

Lt. Chuck Yeager (US 363rd Fighter Group) shoots down 5 German Me 109s in a single engagement over Holland.