The Soviet Union and Finland begin negotiations concerning the establishment of Soviet air bases on Finnish soil. The Soviet Union also requires Finland to cede territory around lake Ladoga and the Gulf of Finland, plus the Petsamo area in northern Finland. In return the Soviet Union offers to give Finland a chunk of desolate land in central Karelia. The Finns reject the Soviet demands fearing that to accept will only encourage further Soviet demands.

1941
Rumours of an impending capture of Moscow by the German Army cause thousands of civilians to flee the city.

Erich Koch, Reich commisar in Ukraine, announces the closing of all schools there. According to Koch, “Ukraine children need no schools. What they’ll have to learn will be taught to them later by their German masters.”

1942
The first night raid on Britain by Luftwaffe for 15 days.

The US Navy surprises a Japanese naval squadron in the night ‘Battle of Cape Esperance’, off Savo Island in the Solomons. The Japanese lose one cruiser and a destroyer, while the US Navy loses just a single destroyer. 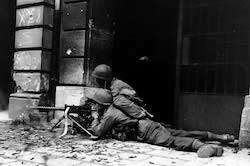 The RAF complete the flooding of Walcheren with a 102-bomber raid near Veete.

The Red Army captures Klausenburg in Romania as Hungary and the Soviet Union begin negotiations for a ceasefire.

Nationalist and Communist troops are soon engaged in a civil war.

US Marines land at Tsingtao, China to slow Communist advances; Japanese troops in Tsingtao surrender to US.