1938
The Hungarian army, with the sanction of its German allies, retakes territory in Czechoslovakia that was stripped from the Austro-Hungarian Empire after WWI.

1939
The Soviet Union signs and agreement with Lithuania that allows the Soviets to establish military bases in the country. 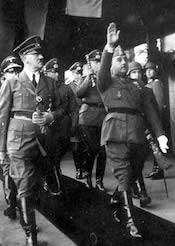 Hitler meets with Franco at Hendaye, France, but fails to convince him to lead Spain into the war.

1941
The 250th ‘Blue’ Division, made up of Spanish volunteers and formed within days of the German attack on the Soviet Union, goes into action against the Russians for the first time in the sector between Lake Illmen and the west bank of the Volkhov river. General Zhukov is put in charge of the West Front for the defence of Moscow. Army Group South concludes the battle along the Sea of Azov and takes 100,000 prisoners.

1942
German and Italian bomber forces begin a major offensive against the British island of Malta in the Mediterranean.

1943
With the war’s tide turning, the Franco government orders the Spanish 250th ‘Blue’ Division home. A few thousand volunteers, however, refuse to abandon the struggle against Communism and enlist in a so-called “Blue Legion” that is attached to the German 121st Infantry Division.

Chiang Kai-shek took the oath of office as president of China.

1944
The American 24-hour surrender ultimatum to Germans at Aachen is rejected. The Canadians enter the Breskens Pocket along the Scheldt with amphibians.

The Red Army breaks through the German lines in Serbia as it moves towards Belgrade.

The Russians reach the Baltic at Memel and cut off Army Group North (26 divisions) in the Kurland for the rest of the war. The rebellion against the Tiso government in Slovakia is put down by the German Army.

U.S. B-29 Superfortresses pound Formosa and Okinawa. The Formosa bombardment lasts seven days, during which over 650 Japanese planes are reported as destroyed.