1939
Germany warns all neutral shipping to stay clear of British and French coasts, or risk being sunk. This had already happened to a number of neutral ships, particularly at night when it was difficult to identify them. U-boat skippers were now given the go ahead to sink any ship not showing lights at night.

1941
Two Luftwaffe officers, make the war’s most audacious attempt to escape from a British POW camp. Lt. Heinz Schnabel and Oblt. Harry Wappler were prisoners in CampÂ No.15 near Penrith, Northumbria. Forging papers that identified them as Dutch officers serving in the RAF, they made their way to the RAF airfield at Kingstown near Carlisle and started the engine of a Miles Magister. Taking off, they soon realized they did not have the fuel to make it to Nazi-occupied Holland reluctantly they turned back, landing in a field about five miles north of Great Yarmouth. Recaptured, they were sent back to Camp No.15 again and sentenced to 28 days solitary confinement.

Theresienstadt Ghetto is established near Prague, Czechoslovakia. The Nazis will use it as a model ghetto for propaganda purposes.

Rommel gives orders for his tanks to cut off the British supply routes by thrusting towards the Egyptian frontier, or as it became known, the ‘dash for the wire’. By the end of the day Rommel’s tanks had reached the frontier and caused complete confusion in the rear of the Eighth Army.

US Army commanders across the Pacific are warned of the possible imminence of war.

1942
Laval sets up Phalange Africaine, to fight allies in Africa.

Laval sets up Phalange Africaine, to fight allies in Africa.

1944
The allies cross the Saar near the Franco-German border. Troops of the French First Army capture Mühlhausen in Alsace, while the French 2nd Armored Division takes Strasbourg.

USAAF B29s from Saipan Island in Pacific, bomb Tokyo for first time, but to little effect. 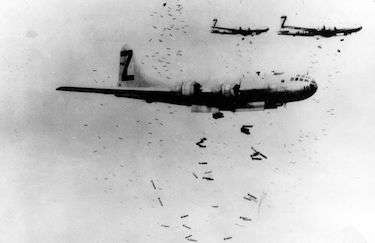