Japanese issue attack orders, although no action is to be taken until the results of the latest diplomatic
negotiations are known.

1942
Northeast and southwest of Stalingrad, the attacking Soviet armies are making rapid progress in the direction of Kalach on the Don, the chosen meeting point of the two pincers. The 6th and 4th Panzer Army’s hurriedly dispatch mobileÂ units to bolster the unprepared and crumbling Romanian defenses west andÂ south of the Don. Hitler relinquishes his command of Army Group A to Kleist.

1943
The Eighth Army crosses the Sangro River for first time. 4,800 British prisoners are taken at Samos in the Aegean.

The Red Army achieves a breakthrough near Kremenchug in the Ukraine and advances toward Kirovograd. Hitler does not allow ArmyÂ Group North to withdraw to Panther line. Russian POW losses for war now total over five million.

US Marines land on Makin and Tarawa atolls in Gilbert Islands, with fierce fighting reported. 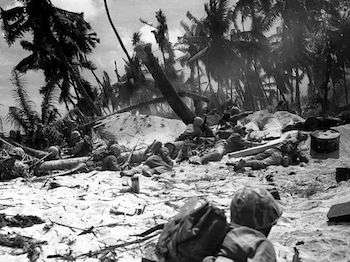 1944
With artillery audible in the distance, Hitler departs for Berlin from the Wolfschanze (Wolf’s Lair), his headquarters near Rastenburg in East Prussia that he has occupied since the beginning of the war with the Soviet Union in June 1941. Although construction work continues on the headquarters, Hitler never returns.