1942
Bitter street fighting continues in Stalingrad with neither side making much progress. Kleist’s final Caucasus advance ends as the 13th Panzer Division of III Panzer Corps approaches the outskirts of Ordshonikidse, the southeastern-most point in Russia to be reached by the Wehrmacht.

Operation ‘Supercharge’, the breakout at El Alamein gets under way. Rommel has only 32 Panzer’s left intact.

Lieutenant General Dwight D. Eisenhower arrives in Gibraltar to set up an American command post for the invasion of North Africa.

In New Guinea, Australians reoccupy Kokoda and its airfield on way from Port Moresby to Buna, New Guinea.

At Bell Island, Newfoundland, torpedo from U-boat U-518 hits dock, the only direct German attack on North American land in the war; two ships are sunk.

1943
The Battle of Empress Augusta Bay in Bougainville ends in U.S. Navy victory over Japan.

1944
The Canadians take Zeebrugge, the last corner of occupied Belgium, on Channel coast. The Canadian 2nd Division withdraws from a 700 yard deep bridgehead in Walcheren. All eligible Germans are ordered to enroll in Volksturm on pain of court-martial.

The United States 28th Division is ordered to clear the Germans out of the Hurtgen Forest and is nearly destroyed in the attempt. 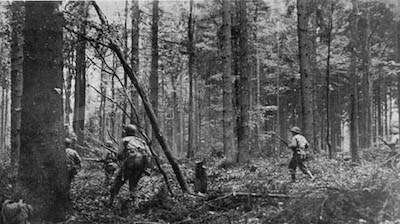 German forces manage to stop the Russians at Kraisevo, enabling the Second Panzer Army to establish a firm line west of Belgrade.

The Red Army enters the southeastern suburbs of Budapest.