1939
The Dutch ship Simon Bolivar hits an ‘un-notified’ mine in the North Sea, killing 80. Several other neutral ships also sunk by mines.

1942
Laval is given absolute power by Vichy in Africa.

The RAF begins the ‘battle of Berlin’ with 700 tons dropped. Other areas also pounded in the biggest RAF operation so far.

1944
A German hospital ship, Tubingen is sunk accidentally by allied aircraft in the Adriatic, but luckily no wounded were onboard. The British express regret to the German authorities about the mistake.

Inmates of Janowska concentration camp near Lwów (at this time in German-occupied Poland), staged an uprising that ultimately failed. Leon Weliczker and several other prisoners had run errands for the camp guards, and were accustomed to bringing firewood into the guard houses. On the evening of the 19th, two groups of prisoners attacked guards in two different locations, stole their machines guns, and started a breakout.[59] The 6,000 remaining Jewish residents of Janowska camp were killed over the next four days and on November 23, Lwów (now Lviv in the Ukraine) was declared Judenrein (“clean of Jews”). 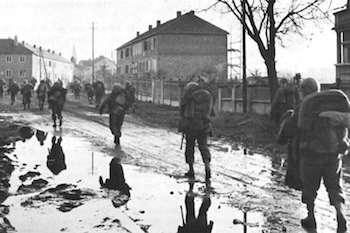