1941
The German 11th Army takes Kerch in the eastern Crimea, although Sevastopol still holds out. 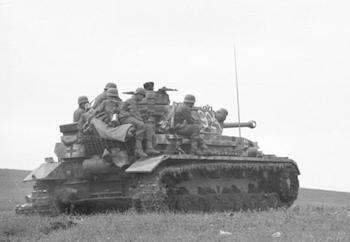 U.S. and Australian forces join up for the assault on the last Japanese stronghold in Northern Papua, the Buna-Gona bridgehead.

German submarine U-173 was depth charged and sunk off Casablanca by American warships.

1943
Leros surrenders to the Germans.

The RAF bomb the ‘heavy water’ plant at Telemark, which the Germans are attempting to repair.

Germany’s nuclear weapons program was dealt a blow when 306 American bombers flew over Norway and struck a heavy water plant at Rjukan and a molybdenum refinery at Knaben.

The Battle of Leros ended when Allied troops on the island surrendered. The Germans paid a heavy price, however. Having lost 160 planes and 4,800 personnel in the five days of fighting, they were even considering calling off the offensive before word of the surrender came through.

Residents of the English village of Tyneham in Dorset were all given notice that they were being evicted. Signs posted in the village that day put everyone on notice that they had to leave by December 19. None of them had the right to contest the action, because they were all tenants of the descendants of Nathaniel Bond, whose family owned the Tyneham House and the surrounding area. The British War Department had acquired the area as a training ground in preparation for D-Day.

The USS Corvina became the only American submarine to be sunk by an attack by an enemy submarine, after the Japanese submarine I-176 struck it with two torpedoes in the South Pacific.

The German submarine U-280 was depth charged and sunk in the North Atlantic by a B-24 of No. 86 Squadron RAF.

The U.S. First and Ninth Armies launch a new attack to the East of Aachen towards the Roer Dams (6 miles away) with four divisions on a 25-mile front. With Antwerp, Marseilles and other liberated ports now available for Allied use, the so-called “Red Ball Express,” a relay of U.S. Army supply trucks operating between the front and the Normandy beaches, is finally shut down.

5,689 tons of bombs, a record for one day are dropped by the RAF on the German frontline to the East of Aachen.