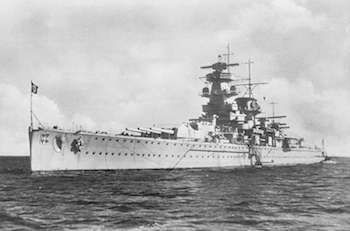 1940
67 RAF Wellington, Whitley, and Hampden bombers attack Hamburg, doing extensive damage to the city and shipyards, with no loss of aircraft.

The prototype de Havilland Mosquito takes off for the first time; designed as a bomber fast enough to dispense with defensive armament, it has a top speed of 400 mph (644 km/h).

RAF squadrons deploy from their bases in the Middle East to Greece under the command of Air Vice-Marshal J D’Albiac.

1941
In temperatures of -20°C, Army Group Centre resumes its offensive against Moscow, employing PanzerÂ Groups 1, 2 and 3, as well as the 2nd, 4th and 9th Armies.

The de Havilland Mosquito light bomber enters service with No. 105 Sqn at RAF Swanton Morley, Norfolk. However, it was on 31 May 1942 that the Mosquito took part in its first operational raid (Cologne).

1942
Another night action off Guadalcanal costs the US Navy three destroyers for Japanese battleship Kirishma.

1943
The allied expeditionary air force is formed in Britain for the invasion of Europe.

Mark Clark calls off the U.S. Fifth Army’s offensive. The British counter-attack on Leros fails as theÂ Luftwaffe flies 600 sorties a day. A State of emergency is declared in Milan as unrest in northern Italy continues. The Germans take 1,750 hostages; machine guns are in the streets and 8pm curfew enforced.