1940
Coventry bombed.  The Luftwaffe launches 449 bombers in a heavy night attack against the major manufacturing city of Coventry, dropping around 400 tons of bombs causing severe damage to industrial and civilian installations. The city centre is badly damaged, with 21 factories being destroyed and the cathedral wrecked but for its spire. The raid kills or injures 1,419 people and makes thousands homeless. A new word is created in both the English and German languages, ‘Coventrate’ and ‘Coventrieren’, meaning the physical and psychological destruction of a city. 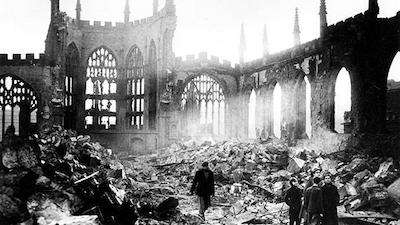 1941
US orders withdrawal of American gunboats and Marines from China to the Philippines.

1942
British and Americans launch offensive from Algeria toward Tunisia.

The Naval Battle of Guadalcanal ended in strategic American victory. On the battle’s final day the Japanese battlecruiser Kirishima and destroyer Ayanami were sunk by the American battleship USS Washington, while the Americans lost the destroyers Benham and Walke.

Church bells were rung throughout England in celebration of the Allied victory at El Alamein. It was the first time that church bells had sounded since 1940 when they were silenced during the threat of German invasion.

German submarine U-98 was depth charged and sunk southwest of Cape St. Vincent, Portugal by the British destroyer Wrestler.

German submarine U-259 was depth charged and sunk in the Mediterranean by a Lockheed Hudson of No. 500 Squadron RAF.

The American Liberty ship SS Robert E. Peary was commissioned just 4 days, 15 hours and 29 minutes after the keel was laid down.

1944
De Lattre launches an attack in the snow near the Swiss border, to take Belfort. The U.S. 95th infantry Division begins to capture the Metz forts. The British begins their attack on Maas in central Holland.

Premiere of documentary Combat America, produced by Clark Gable from footage he took on his five missions with the 351st Bomb Group.

Nine German vessels were destroyed by Great Britain. A tenth ship was driven to the shore. The ships destroyed were moving north along the coast.