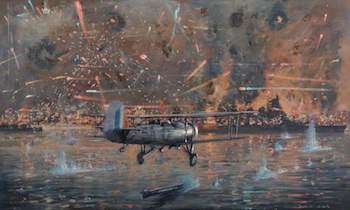 1941
Churchill’s Mansion House Speech: Tells Japan that war on US means war on Britain. The Japanese Foreign Minister says their aim is to make the US and UK retreat from East Asia.

1942
The Americans capture Oran. Petain takes command of all Vichy forces. British successes in Egypt continue with the capture of Sidi Barrani.

In a daring raid in Morocco, destroyer USS Dallas steams up Wadi Sebou under the Kasbah, and takes Port Lyautey Airfield.

Victories in North Africa lead Churchill to proclaim, “This is not the end. It is not even the beginning of the end. But it is, perhaps, the end of the beginning.”

1943
The Red Army achieves a breakthrough near Gomel in Byelorussia.

1944
V-2 rockets continue to hit Britain, at the rate of about eight a day.

Nazi occupation forces in the Netherlands began a two-day roundup of 50,000 men in Rotterdam to be sent to Germany for forced labour.

The American ammunition ship Mount Hood exploded and sank at Seeadler Harbor, Manus, Admiralty Islands with the loss of all 350 crew.