1936
In a speech in Milan, Benito Mussolini described the alliance between Italy and Nazi Germany as an “axis” running between Rome and Berlin. 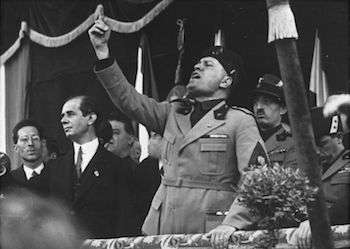 RAF and Fleet Air Arm aircraft attack targets in Naples and Brindisi on the Italian mainland and Albanian ports.

1941
The German government issues a statement denying the charges made by President Roosevelt that the US destroyers Greer and Kearney were attacked by German submarines without any provocation; that the exact opposite was true in that the U-boats fired torpedoes only after they were tracked and depth-charged for hours by these US vessels.

German troops of the 11th Army take Simferopol, the capital of the Crimea and close in on Sevastopol.

1942
In their advance toward Ordshonikidse in the Caucasus, units of III Panzer Corps capture Alagir on the upper Terek river.

1943
The Red Army achieves a landing across the Strait of Kerch from the Taman peninsula and also severs all German land links with the Crimea.

The US 3rd Marine Division lands at Empress Augusta Bay on Bougainville Island in the Solomon’s. A confused naval battle follows.

1944
The first of 9,000 balloon bombs launched against US from Tokyo reach the U.S.A. One bomb kills six people near Lakeview in Oregon.

“Operation: Infatuate I” begins as the British Royal Marines and Army Commandos land on Dutch island of Walcheren off the Scheldt Estuary during the in an attempt to clear the German defenders from this strategic island. “Operation: Infatuate II” was the amphibious landing at Westkapelle, also conducted on the morning of 1 November.

British Intelligence reports that Hitler probably committed suicide on the 30th April in Berlin after marrying his mistress, Eva Braun.