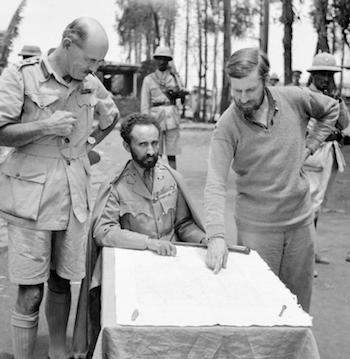 Major General Bernard Freyberg VC, is appointed by General Wavell to command approximately 40,000 British, New Zealand, Australian and Greek troops which are stationed on Crete. While a strong force on paper, these troops have virtually no artillery or tanks and are very disorganised after their hurried evacuation from Greece.

Emperor Haile Selassie returns to Addis Ababa 5 years after his country was occupied by the Italians.

British forces land at Diego Suarez and Antsirene on Vichy French held Madagascar in an pre-emptive strike to stop the Japanese from using it as an advanced base.

The Japanese advance into China along the Burma Road.

The main Japanese striking force which is built around the carriers Shokaku and Zuikaku, enters the Coral Sea and bombs Port Moresby.

Japanese begin preporations to invade Midway and the Aleutian Islands.

1943
British forces break through the defenses of the 5th Panzerarmee to the South of Tunis.

1944
The Russians launch their attack the fortress city of Sevastopol in the Crimea.

A civilian uprising begins in Prague and is aided by defecting units of the anti-Bolshevist Vlasov Army.

Admiral von Friedeburg arrives at General Eisenhower’s HQ in Rheims. General Blaskowitz, the German C-in-C of the Netherlands, surrenders at a ceremony in the small Dutch town of Wagenungen in the presence of Prince Bernhard. The first British victory salvo of war is fired at 3pm from Montgomery’s HQ. Amsterdam is liberated. Eisenhower announces the capitulation of German Army Group ‘C’, which was covering the front from Linz to Swiss frontier. The U.S. Third Army takes Pilsen, Karlsbad and prepares to drive towards Prague.

Reverend Archie Mitchell and his wife and five children discover a deflated Japanese balloon containing a bomb that had been let loose in the West Winds traveling over the pacific to land in Oregon. It killed the wife and children, the only civilian casualties of the war on the continental United States.