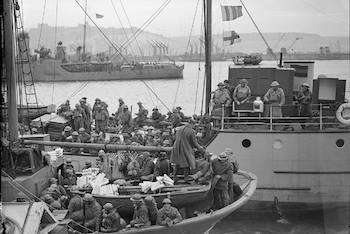 The Defense of Dunkirk continues as 68,000 allied troops are evacuated. The French defense of Lille collapses. Churchill flies to Paris for a meeting of the Supreme Allied War Council, the second time since the 10th May.

British forces enter Baghdad and an armistice is signed. The terms of the armistice require that all axis personnel in Iraq are to be interned and that Iraq support the British cause against the axis.

1942
Bad weather over Hamburg, means the alternate target, Cologne is selected by Bomber Command for the first 1,000 night-bomber raid of the war. 1,046 heavy bombers take off with 850 claiming to have attacked the target with 1,455 tons of explosive. The raid lasted about 75 minutes, a new departure from the past when aircraft were given much more latitude as to when they attacked the target. The raid destroys 600 acres of built-up area, kills 486 civilians and makes 59,000 people homeless. Of the participating aircraft, 40 failed to return and a further 19 crashed for one reason or another.

Since the start of Operation Paukenschlag (Drum Beat) in January, the U-boats operating along the US eastern seaboard have sunk 111 vessels.

The battle of the ‘Cauldron’ begins as Rommel attacks the fortified box in the Gazala line that is held by the 150th Brigade of the British 50th Division. The Italians attack from the west as elements of the Afrika Korps attack from the east. Meanwhile Rommel’s anti-tank gunners, repulse a number of British armored counter-attacks against his position in the ‘Cauldron’. However, Lieutenant General Ritchie is hampered by his inability to concentrate his armor and so is unable to relieve the 150th Brigade.

1943
By the end of May, 41 U-boats have been sunk in the Atlantic due to greatly improved allied anti-submarine techniques and tactics (Hedgehog, greater-range patrol aircraft, better radar, more escort vessels and carriers, plus the advantage of having broken the German Navy Enigma code). “Black May” effectively marks the end of a sustained German U-boat campaign in WW2 which did come very close to starving out Britain and forcing her to make terms with Germany.

The Danish resistance blows up an engine shed at Toender as sabotage mounts, despite Danish King’s appeal for a halt.

The U.S. 15th Air Force bombs German and Italian airfields at Foggia, destroying many aircraft on the ground.

Japanese end their occupation of the Aleutian Islands as the U.S. completes the capture of Attu.

1944
The Russians repel a heavy German counter attack North of Jassy, in the southern Ukraine. Stalin gives the go-ahead to Operation ‘Bagration’ (the Russian summer offensive) which is to destroy Army Group Centre in Byelorussia.

1945
Chiang Kai-Shek resigns the Chinese Premiership but remains as President and Generalissimo, with Dr. Soong succeeding him as premier.

Osaka is totally burnt out by U.S. incendiaries.