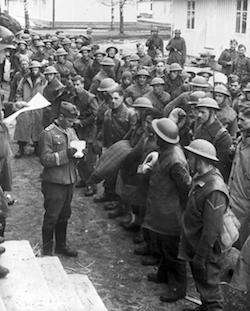 War Office announces withdrawal from Namsos; Allies remain only in Narvik to stop the supply of iron ore to Germany.

Hitler postpones X-Day to the 6th May due to bad weather.

1942
Off the northern coast of Norway, German destroyers sink the British cruiser Edinburgh which was escorting Convoy PQ-15.

The Japanese make landings on Tulagi in the Solomon Islands.

The Japanese covering force at Tulagi, which consisted of the carrier Shoho and escorts leaves to act as cover for the Port Moresby landings.

The Russians report the ‘smashing’ of a German counter attack in the Kuban, to the South of Rostov.

US troops take Mateur, less than 50 miles Northwest of Tunis.

1944
The rationing of all meat, except for steak, is canceled. Supplies of pork and beef are judged to be sufficient for both military and civilian consumption.

1945
Typhoons and Tempests of 2nd TAF carry out devastating attacks on enemy shipping in the Baltic. Large numbers of flying boats and transport aircraft, attempting a massed evacuation to Norway, are also destroyed.

German envoys meet Montgomery at his HQ on LÃ¼neburg Heath, South of Hamburg to discuss peace. The envoys return to Donitz and recommend unconditional surrender of all forces facing the 21st Army Group. The German defence system in NW Germany is now in chaos as troops, civilians and refugees pour west to escape the Russian advance. General Wolz surrenders Hamburg to the British Second Army and declares Hamburg an open city. The U.S. Ninth Army makes contact with the Russians in the Wismar area. The U.S. Third Army crosses the river Inn, while the U.S. Seventh Army captures Innsbruck and reaches the Brenner Pass.

The Russians make contact with the U.S. 9th Army in the Wismar area.

SEAC announces the liberation of Rangoon in Burma.