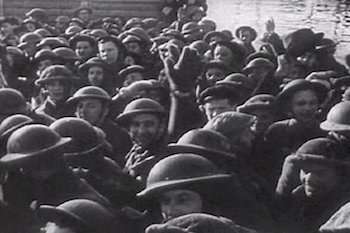 Operation ‘Dynamo’ the evacuation of British, French and Belgian troops from Dunkirk begins. Under the command of Admiral Bertram Ramsay, hundreds of naval, commercial and private vessels participate in this most desperate rescue attempt. Calais falls to the Germans as they advance towards Dunkirk after Hitler’s stop order is rescinded.

Following the fall of Calais and Boulogne, Dunkirk remains the only port available for the evacuation of Allied troops from the Continent. No. 11 Group, under the command of Vice-Marshal Keith Park, assigns 16 squadrons to the protection of the port. During the evacuation, a total of 32 participate, although they are rotated to provide rest periods and preserve aircraft for the inevitable defense of Britain.

1941
British flying boat spots the Bismarck at 10:36am. Swordfish Torpedo-bombers from the Ark Royal score hits on the Bismarck, disabling her steering gear and rendering her maneuverable. This enables British destroyers to attack after dark.

The Aircraft carrier Formidable is severely damaged in the Mediterranean by Stukas.

1942
Britain and Russia sign a treaty in London. Each county pledges itself to fight Germany until final victory and not make a separate peace. The also agreed a 20-year alliance, not to join any coalition or treaty directed against one of them, and not to interfere with the other states internal affairs.

In the Barents Sea, Convoy QP-12 is on its way home to Britain with 15 ships, while Convoy PQ-16 is en-route to Murmansk with 35. Some 260 Luftwaffe aircraft, including He 111 torpedo bombers, swing in to attack, joined by U-boats, amid appalling weather. QP-12 emerges unscathed, but PQ-16 feels the teeth of a running five-day battle, losing an acceptable six ships.

The battle for the Gazala line begins (Operation Theseus), as the Afrika Korps thrusts towards Tobruk with 560 tanks sweeping round the southern end of the Eighth Army’s defensive positions, although the Free French forces at Bir Hacheim manage hold up this advance.

1943
The British Government informs churches throughout England that they may ring their bells freely. The ringing of church bells has been banned, except to warn of an invasion, since the start of the war.

The Red Army begins an offensive against the German forces isolated in the Kuban bridgehead between the Sea of Azov and the Black Sea.

1944
Charles De Gaulle proclaims his Free French movement to be the “Provisional Government of the French Republic.” Though the new government wins recognition from Czechoslovakia, Poland, Belgium, Luxembourg, Yugoslavia and Norway, Roosevelt and Churchill are furious and refuse recognition. They retaliate by excluding De Gaulle from the final planning for Operation Overlord.

U.S. troops from Anzio take Cori, 22 miles inland. Mark Clark makes a decision to direct four divisions on Rome, but only one to Valmontone on Highway 6 to cut German retreat.

The Japanese launch a two-pronged attack from Canton and Hankow.