Hitler halts Panzer drive on Dunkirk. Infantry units of XIX.Panzerkorps storm the citadel of Boulogne and take 5,000 British and French prisoners. The French fortress of Maubeuge surrenders, while 6th Army captures Ghent and Tournai in Belgium and St Omer in North-eastern France. 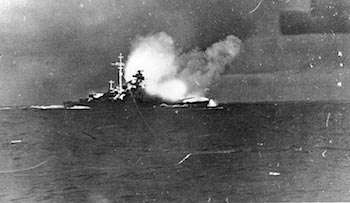 The German battleship Bismarck, supported by the heavy cruiser Prinz Eugen, sinks the British battle cruiser Hood after firing only three salvoes. There are only 3 survivors out of a crew of 1,421. The Prince of Wales is also damaged and forced to break off the action.

The Australian Prime Minister, R.G. Menzies arrives back in Australia after his trip to Britain.

1942
General Stilwell arrives in Delhi after a 20-day jungle trek out of Burma.

The Germans decide they’ve had quite enough of the partisan harassment in Russia and launch operation ‘Hanover’, to clear the Bryansk-Vyazma railway. For six days, 45,000 German troops, including panzer and SS-police units, search for an estimated 20,000 partisans, catching or killing many of them. In the Barvenkovo salient, General Ewald von Kleist’s Panzer’s start to chop up the Russian 6th and 9th Armies. Moscow admits the loss of 5,000 dead, 70,000 missing, and 300 tanks destroyed, but the Germans claim 24,000 POW’s and 1,200 tanks.

The battle of the Atlantic is officially concluded as won by Allies, due to the withdrawal of virtually all U-boats from the Atlantic by Admiral DÃ¶nitz, C-in-C of the Kriegsmarine after the loss of 56 boats in April and May.

1944
Prime Minister Winston Churchill takes to the floor of the House of Commons to announce that Spain will not be a target in the forthcoming Allied invasion of mainland Europe and Spain’s internal affairs are no business of the Allies. He expresses the hope that a post-war Francoist Spain will be “a strong influence for the peace of the Mediterranean after the war.”

It is estimated that 100,000 have been gassed at Auschwitz. Between May 16 and May 31, the SS report collecting 88 pounds of gold and white metal from the teeth of those gassed. By the end of June, 381,661 persons, which is half of the Jews in Hungary have arrived at Auschwitz.

1945
The exchange of Russian POW’s for U.S. and British POW’s begins at pre-arranged points in Germany.

Japanese make a suicide paratroopers jump on Yontan airfield on Okinawa and destroy seven US aircraft.