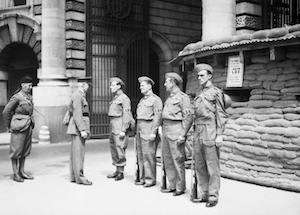 Its announced that over 250,000 men enrolled into the LDV (Home Guard) in just the first 24 hours.

The isolated German troops at Narvik are now close to exhaustion and will be unable to hold out for very much longer.

A British counter attack is launched near Arras with armoured and infantry support against Rommel’s 7th Panzer Division, throwing it off balance. A similar attack in the south by a French armoured brigade under General de Gaulle fails after initial success. The French Ninth Army is surrounded and destroyed, its commander, General Giraud, taken prisoner.

Vichy military court sentences 56 NCO’s and privates, siding with de Gaulle to death or hard labour in absentia. All property of free French fighters is to be confiscated.

Against strict orders not to attack American vessels, the US merchant ship Robin Moor is sunk by U-69 (Kptlt. Metzler). This sinking of a neutral American vessel is publicly denounced by President Roosevelt and becomes yet another argument for him in his secret desire for bringing the United States into war against Germany.

An RAF reconnaissance plane sight the Bismarck and Prinz Eugen in the port of Bergen, allowing the British Home Fleet time to ready plans to intercept them in the earlier hours of the 22nd May.

1943
The Luftwaffe carries out a raid by FW-190 fighter bombers against Malta.

1945
The British Second Army arrest Himmler (in disguise) at Bremervorde.

The Japanese begin the evacuation of Shuri, on Okinawa. Their losses so far are estimated at 48,000 killed out of a garrison of 85,000.