1940
Biggest RAF attack on Germany to date as the oil tanks at Bremen and Hamburg are blown up. British claim 1,000 German aircraft lost in a single week.

Twelve Blenheims attack enemy tanks and troops near Gembloux. Ten are shot down by fighters and one by ground fire. 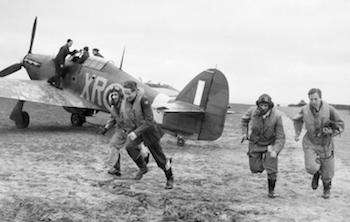 The German battleship Bismarck and the heavy cruiser Prinz Eugen leave Gotenhafen in the Baltic to begin operations against British convoys in the Atlantic (Operation RheinÃ¼bung).

The Italian Army joint is forces in Amba Alagi, but at May 17 they collapse and surrender. The British Army captures 230.000 prisoners.

1942
Air Marshal Harris is given permission by Churchill for a raid on Germany by 1000 bombers. This was in spite of the fact that the RAF’s operational strength at this time was only 500 aircraft. However, it was believed that by enlisting RAF Coastal Command and the RAF’s training squadron’s, then the magical 1000 bombers could be found. Harris believed that the only way to get a commitment for strong bomber force, was to demonstrate what could be done with one. He planned to launch operation ‘Millenium’, before the end of the month.

The Russians continue to evacuate their forces across the Kerch Straits, leaving behind vast amounts of artillery and heavy equipment, which the Germans then turn upon the besieged fort of Sevastopol.

1943
The Memphis Belle completes 25th and final mission against Nazi Germany and the occupied territories.

The Luftwaffe carries out a night raid involving 89 aircraft against Cardiff in Wales.

The Germans launch a fifth offensive to destroy Tito’s partisans in Yugoslavia.

1944
Kesselring orders the evacuation of Cassino. The French breakthrough is now 25 miles deep.

U.S. troops land on Wake Island and the northern coast of New Guinea, 125 miles to the West of Hollandia.